Sixty-three (63) Bauchi State lawyers, representatives Ministries, Departments, and Agencies (MDAs), traditional and religious leaders, NGO representatives, and members of the media joined the USAID-funded Integrated Health Program (IHP), lead gender partner WI-HER, LLC, and IKRA Foundation for Women and Youth Development on November 21, 2019 at the High Court Complex to discuss violence in the State and support the domestication of the Violence Against Persons Prohibition (VAPP) Act.

The VAPP Act, passed by Nigeria’s National government in 2015, is an improvement on the penal and criminal code in relation to violence. It resulted from the need for protection of persons against the different forms of violence and applies to violence at home, in society, and in private and public spheres. Further, the VAPP Act expands definitions of violence to include acts against men and boys, and also provides protection for victims/survivors of violence and punishment for offenders.

As part of IHP’s activities in Bauchi State – which contributes to State-level reductions in child and maternal morbidity and mortality – IHP works to strengthen State-level policies and practices. Strong collaboration with the Ministry of Women’s Affairs, the Social Welfare Department and the Judiciary, and other actors contributed to pulling together Stakeholders to discuss the VAPP Act and the success of the Meeting. 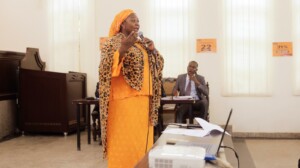 More than 50% of Meeting participants were not aware of the VAPP Act prior to the gathering. With that, the Meeting provided the space to hear about violence trends in the State (which is on the rise!), examine ways in which violence influences health, understand the current legal landscape and reflect on its inclusiveness, and learn about the VAPP Act and discuss what can be done at State level.

During the Meeting, Stakeholders provided the following recommendations to facilitate the domestication and passage of the VAPP Act:

A success is raising awareness of the VAPP Act, the Stakeholder’s Meeting is timely against the backdrop of the international-recognized 16 Days of Activism Against Gender-Based Violence campaign which runs from November 25 (International Day for the Elimination of Violence Against Women) to December 10 (Human Rights Day). The Meeting coupled itself with a Call to Action for Stakeholders to join the November 25th rally at the Bauchi State House of Assembly aimed at promoting VAPP domestication to legislators.

The USAID Integrated Health Program (IHP), led by Palladium, currently provides technical assistance to three States in Nigeria – Kebbi, Bauchi, and Sokoto – to strengthen health systems and improve access to and quality of RMNCH+NM and primary health care services. Expert gender integration and social inclusion partner, WI-HER, LLC, is proud to support this initiative and leads efforts that promote equitable services that reach the most marginalized populations while working to advance IHP goals and objectives.