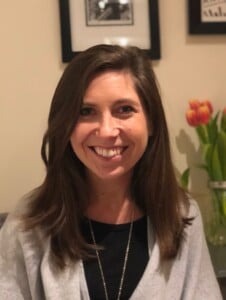 Yesterday was the last of the 16 days of activism against gender-based violence, WI-HER calls on legislators and policy members to step up and fulfill their global commitments to prevent and adequately respond to violence. Step up with legal protections for women. Step up with laws that criminalize violence against women and children. We know that violence against women is an injustice and a breach of women’s basic rights. Yet in over 40 countries around the world, domestic violence is not against the law. Fortunately, as seen in the figure below, there has been a major increase in the establishment of national laws against various forms of violence over the last decade. But progress cannot happen fast enough. 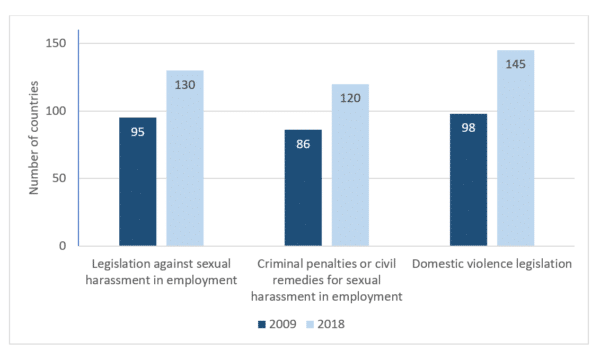 Women’s rights movements and campaigns, including #MeToo, NiUnaMenos, and SheDecides among others, efforts have been instrumental in driving legal reform. A recent report from the High-level Group on Justice for Women put it well: “Across the globe, women’s demands for accountability for violations and abuses have gained greater attention than ever before. This is a watershed moment for gender equality, with campaigns and movements worldwide…with women’s marches, local and national-level agitation, and many governments and corporations underlining their commitment to change.”

Do laws even matter?

The short answer is yes. According to forthcoming analysis by Klugman and Li, laws are key to violence prevention and response due to their ability to both establish and reinforce social norms. They found that the existence of a law specifically against domestic violence is associated with a 3.7 percent lower rate of intimate partner violence (IPV), which is the most common form of violence against women. Their analysis of 84 countries reveals that specific legislation against IPV not only reduces the rate of violence but also reinforces the impact of other laws related to gender equality. Furthermore, a recent World Bank report shows that women are more likely to tolerate abuse when there are fewer legal provisions to protect them.

So how can we improve legislation?

As seen above, legislation against sexual harassment in the workplace has lagged behind domestic violence legislation; and as we know, even in countries with such laws in place, sexual harassment in the workplace is pervasive. Many of the recent women’s rights movements have focused on sexual harassment in the workplace, shedding light on the need to fundamentally transform the power structures and discriminatory norms that enable such harassment to take place and to go unchecked. This year, as part of the 16 days of activism, activists are demanding the ratification and implementation of “ILO C190” which recognizes GBV in the world of work as a global concern and a violation of women’s basic human rights. This historic and legally binding Convention also lays out minimum standards to prevent, identify, and provide redress in cases of GBV in the world of work. You can learn more about the Convention and campaign, here.

WI-HER is proud to join the movement in calling for the ratification of ILO C190. But we recognize that the work does not end there.

Treaties and laws alone are not enough. Women and men must be informed of their rights under the law so that they are able to—collectively—pressure their local leaders for greater protections and services and to hold them accountable to enforcing laws and providing protection and support. But it is not on survivors and advocates alone to solve these challenges. We need enforcement, accountability, and improved systems. We need to improve access to justice for women, men, and children; ensure confidentiality and safety for survivors; and train members of the justice sector—from police to judges—on how to sensitively and effectively handle cases of violence and abuse.  We need a justice sector that is more responsive —and we need to pair it with efforts to tackle discrimination and structural inequalities at work, in the home, and across all levels of society.