Energy and Malawi: Gender and Social Inclusion in Resettlement

Energy and Malawi: Gender and Social Inclusion in Resettlement 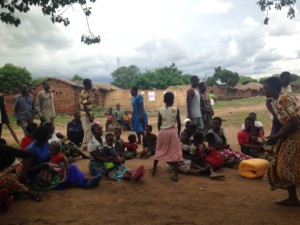 Focus Group Discussion with men and women in Malawi

Currently, approximately 9% of Malawians have access to electricity. Electricity is vital to the development of a nation’s economy as well as its health and safety. It powers hospitals providing critical care and services, schools educating the youth of Malawi, and refrigerators that keep food fresh and safe longer. Malawian women have a unique understanding of the importance of this public utility as it decreases their risk of being subjected to gender-based violence To make the nation’s staple food, nsima, Malawian women take maize to an electricity-powered mill to be ground into fine flour. If there is no electricity to power the mill, women must wait, sometimes all day, and upon their return in the evening they are vulnerable to violence either on their journey back or at home.

To improve the generation and distribution of electricity, the US Government is supporting the Government of Malawi and the Electric Supply Company of Malawi (ESCOM) in energy sector reforms. Part of the energy sector reform process includes the improvement of existing and the development of new hydropower plants and electricity substations. While the improved generation and distribution of electricity will likely increase incomes and reduce poverty in Malawi, there are many social and gender considerations that must be taken into account in this process, including the resettlement of Malawians due to the construction of hydropower plants and electricity substations in areas previously occupied by residential homes and farms.

When large-scale infrastructure development projects take place, it is often necessary to acquire privately owned land to build infrastructure. This is the case regardless as to if the project focuses on electricity, water, roads, or other utilities. Acquiring land can be a challenging and complex process in countries where many people survive off of subsistence agriculture. For example, land-for-land compensation is preferred in resettlement cases, but it can be difficult to find comparable land for a large number of people. Additionally, the timing of moving people to their new land or requiring they leave their land is critical. If land is taken and people are resettled before crops are harvested, families could be left with no food to sustain themselves over the winter months.  Resettlement must be planned in conjunction with infrastructure development planning to ensure proper timing of resettlement and to prevent delays in construction. Additionally, public lands should be used whenever possible to minimize the disruption to existing social structures and networks.

Providing cash compensation for land also presents potential problems, as many recipients may not have knowledge of how to open or manage bank accounts or how to manage a large sum of money. Additionally, it was seen in Malawi that the gender-related disparity in control over household resources has the potential to result in mismanagement of funds by the husband or male partner. For example, it was reported that some men used compensation cash on commercial sex or alcohol instead of on household items or school tuition fees for their children. If cash compensation is given, financial trainings, including joint-budgeting training that emphasizes taking the needs of the whole family into budgeting decisions, can combat this issue. Though men in the household often have greater decision-making power on the type of compensation to accept, it was reported that some women managed the negotiation process independently and found it to be empowering.

A third area where social and gender concerns play a key roll is in the grievance process. In the resettlement planning process, it is necessary to ensure there are mechanisms to handle grievances or cases when the person to be resettled does not agree with the terms of their resettlement. In societies like Malawi where land ownership and inheritance depends on whether a community is patrilineal or matrilineal, the grievance process becomes more complicated. For example, a widow and her children who lived in her deceased husband’s house in a patrilineal community was informed that she must be resettled. Her husband’s family then claimed that they should receive the compensation as the land belongs to them since they were members of the husband’s family, not the wife. In matrilineal societies, though women inherit the land, they often do not have decision-making power in the household over that land or in the compensation process. To assist grievance councils handle these complex cases, councils are trained in gender and social inclusion.

As is evidenced by the energy reform program in Malawi, the consideration of social and gender issues in design, implementation, and monitoring and evaluation processes is key to  ensuring large-scale infrastructure projects resettlement processes respect human rights positively impact the social and economic development of Malawi